In the fourth quarter of FY 2019-20, Lupin, Mumbai’s largest pharmaceutical manufacturer, reported a 25% decline in pre-tax revenues (before branded items) to Rs412, with sales slightly down year-on-year to Rs3791.

However, the company has always performed better, both in terms of sales and profits. The shares closed the trading day at Rs 869.8, a fall of 1.3%.

Analysts say the quarter was operationally weak, with other revenues and one-time gains from the sale of the Kyowa business in Japan. Lupin handed over its Japanese injection activities to Neo ALA Co. for 3,702 Croatian rupees. The agreement announced last year was intended to strengthen the company’s balance sheet and net debt of Rs. 4,361 to Rs. 1,129.

Lupin’s activities in India developed well in the fourth quarter and grew by 13.3%, down 8.1% on the third quarter. In contrast, US companies fell to Rs 1579 crores year-on-year, but registered steady growth (14.7%). The United States accounts for 38 percent of Lupin’s worldwide sales, and for the entire period 2019-20 they amounted to 5,821 Croatian rupees. Lupin launched six products in the United States during the quarter. 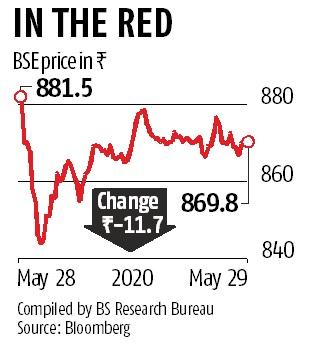 The Europe, Middle East and Africa (EMEA) region also recorded quarter-on-quarter sales growth (7.4%), but Latin America, Asia Pacific and the rest of the world markets declined by 2.3%, 15.5% and 36.8% respectively. In contrast, the Active Pharmaceutical Ingredients (API) activity showed an increase in sales of nearly 13% compared to the previous year.

Edelweiss analyst Ankit Hatalkar estimates that U.S. sales of $212 million exceeded its estimate of $190 million for the quarter and that the company grew to $200 million after two junior quarters. According to his information, Mr Lupin currently has 43 opportunities to participate in the FTF programme in the United States, including 14 exclusive FTF opportunities. According to Mr. Khatalkar, the Asia-Pacific business represents less than 5% of sales after the sale of Kyowa’s operations.

said Lupin’s general manager, Nilesh Gupta: We ended the year with strong growth in all our key markets and a significant strengthening of our profitability and balance sheet. We have seen strong growth in our two main markets, the United States and India, and in the level of compliance at all our sites. It is important to note that we have now succeeded in ensuring business continuity while ensuring the health and safety of our employees.

During the quarter, numerous lupine production facilities received inspection reports (IIRs) from the U.S. Drug Enforcement Administration, including Coral Springs, Florida, Aurangabad here with the exception of Nagpur, Pitkhampura 1, the Vizag plant and others.

Compared to the previous quarter, the company recorded sales growth of 2% and PBT growth of 128%.