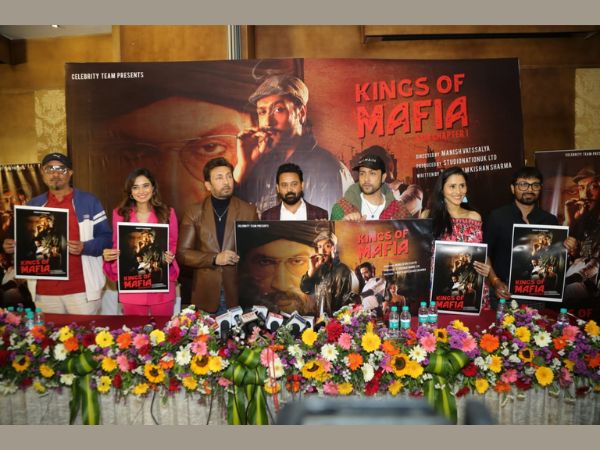 Mumbai (Maharashtra) [India], January 17: “They tried to bury us. They didn’t know we were seeds,” is a very beautiful quote by Dinos Christianopoulos. Crime doesn’t pay, but we’ll sure pay to watch crime! Crime dramas that is. There’s nothing better than watching mafia stories, and there’s no shortage of great murder mysteries and crime drama series. Audiences are often drawn to worlds they’re unfamiliar with when living an ordinary life – it stands to reason that mafia shows are one of the more popular subjects on television. The mafia, crime families, and all kinds of gangsters that can be found on this list allow viewers to vicariously live a life of high stakes, thrills, and glamor. The best gangster shows, of course, present us with complex characters in difficult situations that question commonly held beliefs about morality. Actor and Producer Adam Saini, who served in Scotland Police, is now bringing the world’s biggest 100-episode crime drama, “The Kings of Mafia – Asia Chapter I”. Saini, who was last seen in the Bollywood Film Scotland, now plays an Agent in the upcoming crime drama “The Kings of Mafia – Asia Chapter I”.

Producer and Actor Adam Saini, along with actors Sekhar Suman, Adhyayan Suman, Stefy Patel, Khushboo Purohit & Govind Namdev, unveiled the first look poster of the movie “The Kings of Mafia – Asia Chapter I” which is produced by StudioNationUK Ltd and directed by Manish Vatssalya and written by Vinay Ramkishan Sharma. The poster generated much hype even before its release. Now, the poster is finally out. And, well, it is just as hotly trending as we had expected it to be. While talking to the media, producer and actor, Adam Saini said, “It’s a great pleasure working with Shekhar Suman & Adhyayan Suman and director Manish Vatssalya. Talent It has no colour in which everyone is an artist. I’m connecting the film industry to decentralised blockchain technology, thereby converting entertainment art into NFT so that many will get the opportunity to own a stake in the entertainment world, unlike how it’s currently owned and controlled by the very few today”.

It is the first time in Indian cinema that Father and son, actors Shekhar Suman and Adhyayan Suman, will face each other as a villain and hero. It is a fiction story about the Syrian mafia, from the best to the worst. We are sure this crime drama will become one of the best crime series in world television history.

Actor Sekhar Suman said, “I would like to thank Mr. Adam Saini for this opportunity. When Manish ji narrated this story, I immediately said yes to this because it’s a very interesting crime drama”.

The 100-episode crime series will be shot in Abu Dhabi, Dubai, Cyprus, Hungary, and Georgia. Director Manish Vatssalya said, “I would like to thank Adam ji, Shekhar Ji, and Adhyayan for his trust in me. The series is based on the Syrian Mafia. Very soon, we will start the shooting of the series across the World”.

The makers also released the poster for their next English movie, Scar, which is produced by StudioNation UK Ltd. and directed by Manish Vatssalya.

entertainment
By News Radian BureauJanuary 17, 2023EntertainmentLeave a Comment on Actor Adam Saini Sekhar & Adhyayan Suman unveiled the poster for “The Kings of Mafia – Asia Chapter I”