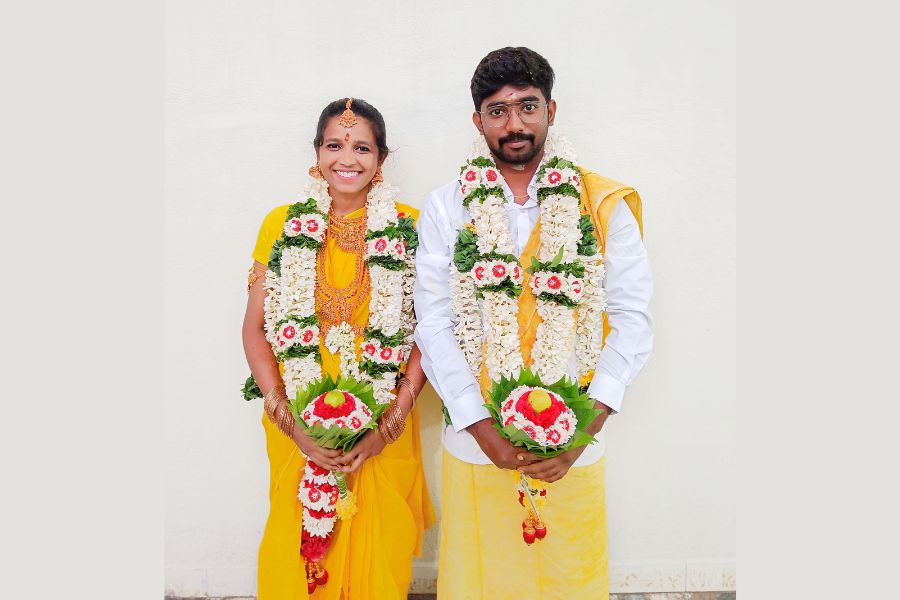 Chennai, December 03: On an auspicious ceremony conducted at Lord Shivan Parvati Temple, Athani Village, Tamil Nadu, India, on the early morning of 25th November 2022, the World’s youngest corporate CEO Dr. Aravind Lakshminarayanan got married to former Yoga world champion Ms. Madhumitha Ramesh. The ceremony was blessed by the presence of many distinguished personalities, local VIPs, and the dear and near of the couple.

The couple is both frontrunners in their expertise and shares a common passion for Yoga. They go by the stage names of Yoga Aravind and Yoga Madhumitha and have represented India and won countless state, national, international, and world yoga championships.

The year 2016 witnessed them earning selection to the coveted Indian Yoga team and joining the team in the 7th Amateur Asian Yoga Sports Championship. They went on to win the championship in the Artistic Yoga Pair Category (Men and Women). They were honored at the same championship as the “Best Yoga Artistic Pair”. The chemistry at Yoga grounds has brought the champions to the wedding grounds, and their allies and well-wishers were more than overjoyed.

Hailing from Namakkal District, Tamil Nadu, India, Dr. L Aravind is a successful entrepreneur who also shines in several other roles, like a politician, yoga instructor, lyricist, and actor. The man behind the successful Aravind Group has business territories across fields like event management, social media marketing, yoga coaching, textile engineering, and many more. His efforts to excel in multiple facets of society were rightfully honored by the International Youth Award 2021, Best Youth Award 2019, and the Young Achiever Award 2018. He has also secured many world records and is presently decorating various leadership positions in organizations like the Tamil Nadu Yoga Federation, Indian Association of Yoga for All, World Arts Federation, and many more.

The Aravind Group has around six companies across various fields: the Aravind Event Management Company, Aravind Yoga Centre, Dream Promoters, Alpha Enterprises, SHAN-TECH Private Limited, and Vignesh Textile Engineering. Dr. Aravind L found the stepping stones of his business group at the young age of 22 and was soon felicitated by the business world with the “World’s Youngest Corporate CEO Award”.

A person of commendable perseverance and drive, Dr. Aravind Lakshminarayanan found the best partner in Ms. Madhumitha, both professionally and personally. Hailing from humble origins yet making it big out in the world of competitional Yoga gives a clear picture of the determined and hardworking spirit of Ms. Madhumitha. Being the winner of countless records and gold medals in the field of Yoga and the on-ground partner of Yoga Aravind in competitions, Madhumitha proves to be a precious asset to the personal and professional life of Dr. Aravind.

The couple has already expressed their plans to pursue further Nobel world records and Guinness world records together in the Pair Yoga Category, and the kinsfolk from near and far have expressed their most extraordinary jubilation on the togetherness and the prosperous future of the couple.